Share All sharing options for: Chris Obekpa To Take Official Visit To Oregon 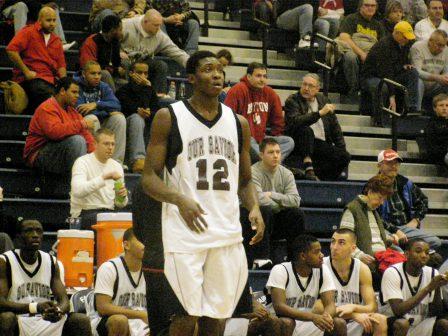 The Oregon Ducks were one of the last schools to get into the recruitment of Chris Obekpa. As of the first of March Obekpa didn't even have an offer from the Ducks. But he does now and Uncle Phil's Army, more commonly known as the Oregon Athletic department, are throwing the might of their resources at the problem.

I have more concern about this visit than the one that Obekpa took last weekend to St. John's. Oregon likes to talk about having the best facilities in the country. And they aren't joking. By most accounts Obekpa has been a Bearcat lean for a while.

Almost all of the talk about the big man before the Johnies visit pointed to a decision in the Bearcats favor. But the Johnie's visit and now the trip to the Pacific Northwest has changed the narrative. If there is a school that is capible of blowing the mind of a prospective recruit despite having little in the way of tradition it's Oregon.

Also another interesting subplot about this is that the lead recruiter of Obekpa for the Ducks is none other than Tony Stubblefield. The one time UC assistant and ace recruiter who was the point man for the Lance Stephenson experience. Stub left the Bearcats to take a job on Dana Altman's staff in the summer of 2010.

Obekpa is expected to make his final decision sometime after his visit to the Ducks. The late signing period for Basketball starts on April 11th and runs through the 16th of May. Stay tuned to Down The Drive for more news on this front.