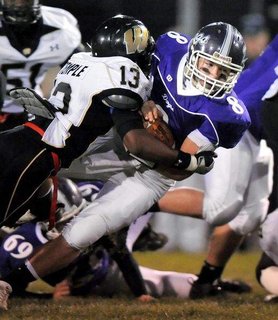 Temple is the first crest in what is shaping up to be a tidal wave of Warren Central products joining the Bearcats. To be completely accurate Adrian Robinson was the first Warrior to align with the Bearcats. Warren Central is a school that has a long history of athletic excellence. They claimed 4 straight titles in Football from 2003-2006. More recently WC took home the 2009 title. Temple was a starter on that team. WC couldn't repeat last year in Temple's final season. Still landing Temple was the first real indication that Butch Jones was not screwing around in recruiting. Temple had offers from West Virginia, Colorado, Iowa State, Wisconsin and Louisville among others. Temple committed in early June with the intention of enrolling early and participating in spring practice.

Temple is ideally suited to be a weak side linebacker at the college level. He isn't that tall and accordingly doesn't have ideal arm length. But he is super aggressive in run support. At his size and with his athleticism you would expect him to be good in coverage. As far as I can tell that is true. For the most part Temple makes up for his lack of size by p[laying like a human cruise missile he fly's around a lot.

Rotation player. Temple did indeed enroll early, along with Dwight Jackson. His participation all but guarantees his inclusion on the two deep this year. This paid dividends not only in terms of gaining valuable reps but getting into a college weight program 3 months quicker than he would have otherwise. After playing his senior year right in the neighborhood of 200 pounds Temple is a legit 215 heading into camp. There has been a lot of speculation that Temple is just a placeholder at linebacker this year and will move to safety when linebacker depth gets shored up a bit. I don't see that happening. Temple is a linebacker all the way and should be a fixture in the two deep for the next four years if he can stay healthy.