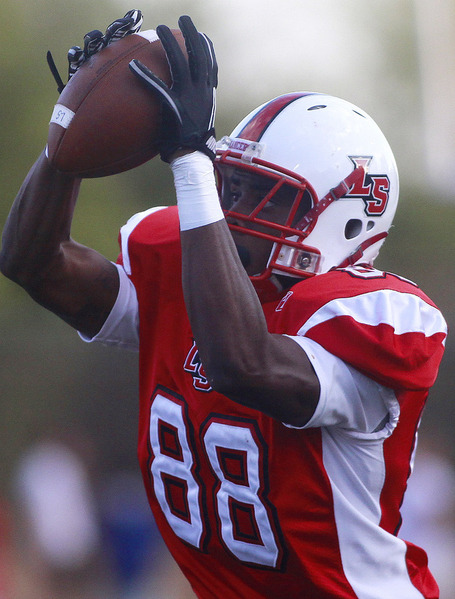 Coleman is the latest in a long line of former Lancers to make his way from North Bend Road to Clifton. Coleman was something of an unknown amongst the recruiting services at the time of his commitment. He hadn't hit the combine and camp circuit as hard as some players do. That kept him under the radar. Or about as under the radar as you can be leading the GCL in catches, yards per catch and TD's.

Coleman is a two strider, meaning that he covers around 5 yards every two steps. That is a quality that coaches love to see in a wide receiver. The comparison that most Bearcat fans are likely to make for Coleman is Armon Binns because their measurements are practically identical. Binns stood 6'2", Coleman stands 6'2". Binns weighed 182, Coleman weighs 185. That is where your mind will jump, but it's not a very apt comparison as far as I am concerned. At the stage Coleman is already more advanced as a receiver. The word polished comes to mind.  Rod already has a wide array of feints and stems that enable him to set up defensive backs and open up the area of the field where the ball is going to go. For a high school receiver this is a master class. He is just an absolute technician working on DB's. Additionally he is good after the catch. He doesn't have a ton of shake in his game, but he is a hard runner and difficult to get to the ground.

Hazy. UC was the only school that offered Coleman in the recruiting process. Grades have always been a concern and surely kept a lot of schools away. UC took a flier on Coleman, and I am happy that they did. But I am not entirely confident that he will be able to get beyond the Clearinghouse to be eligible to play this year. I have every freshman wide out on my two deep this season as there are plenty of reps out there for receivers this year. I don't have Coleman's name up there because I have no idea if he will be good to go. Mike Dyer reported that Coleman will be reporting to UC on July 26th which is basically a week before camp starts. I don't doubt that to be the case, but I don't think anyone has a clue whether Coleman will pass the NCAA clearinghouse and be eligible to play this year. If he is I think he gets quite a bit of playing time. If not I have no idea what will happen.