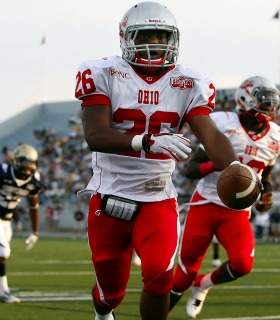 So, this Akise Teague is really good. Last night I was monitoring the progress of the Big 33 game, mainly on twitter, so I had some idea of the kind of night that Teague had. But because I couldn't watch it live and the Ohio broadcast didn't start until 11:30 last night I just recorded it with the intention of watching it this morning. I did watched it this morning and even knowing just how good a night Teague had I was stunned by what I saw.

Teague was simply on a different level than everyone else. He sees the game so well and has the kind of short area quickness that is hard to find. It was just an all star game, but even in all star games when you see a player so cleary distinguish himself against a higher level of competition it's staggering to watch. At about the midway point of the third quarter Matt Denison, the Ohio coach, basically decided that Akise Teague was not fair and he only played a handful of snaps thereafter. Needless to say I am kind of happy to have Akise suiting up for the Red and Black for the next four years.

Jameel Poteat was the other Bearcat signee participating last night. He didn't have nearly as good a day. But it should be noted that Teague was running behind an almost entirely Big 10 offensive line with two high caliber QB's Poteat's offensive line suck frankly, and after the midpoint of the 2nd quarter PA had to throw and he was taken completely out of that game. Still the talent is apparent and the prospect of a Poteat and Teague backfield for the next four years should be appealing.