Memphis Defensive Back Alex Dale Commits to the Bearcats; Updated with Junior Film

Share All sharing options for: Memphis Defensive Back Alex Dale Commits to the Bearcats; Updated with Junior Film

For those that have been following the recruiting efforts of Butch Jones and his staff for the 2012 there has been a A lot of talk about their collective efforts in and around Memphis. This is an area where UC has heretofore had no presence what so ever, since 2002 UC has not landed a single Memphis area prospect. While UC is still in play, or at the very least reported to be in play with some highly regarded prospects from Memphis like Brian Kimbrow, Nathan Gross, Sheldon Dawson, Will Redmond ect. Still for all the talk Jones had yet to manage a breakthrough, he had yet to land one of those kids. That changed tonight when Alex Dale cast his lot with the Bearcats. 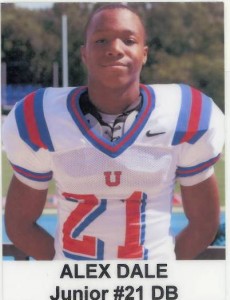 Dale attends Memphis University School which typically has a strong team, if not always a ton of BCS caliber talent. That being said the have had some highly regarded prospects on the roster before, most notably Barry Brunetti who signed with West Virginia, and has subsequently transferred to Ole' Miss. Speaking of Ole' Miss they were one of the schools who offered Dale. Here are some Junior Year highlights for your viewing pleasure.

Dale played safety for the Owls but I am not sure that he has the size to play this scheme at that position. That being said I like quite a lot of things about Dale, most notably his short area quickness, willingness to hit and the way he recognized routes and drives on the Football. If he is to play corner I would have a concern about his hip flexibility, primarily because with the film that's available I can't make a determination about it. Either way I am happy about adding Dale to the Bearcats commitments. Hopefully Dale will be the player who opens up the Memphis pipeline.

Thanks to reader Aduc12 for pointing out that the highlights above are from Dale's Sophmore season. Junior highlights are posted below for your viewing pleasure.