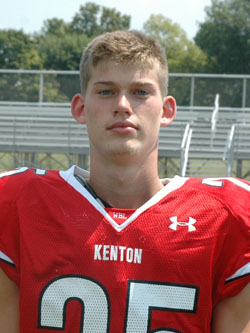 Morrison attended Kenton High School. That's the same high school that produced UC's one year wonder Ben Mauk, Morrison played for Mauk's father and with his brother Maty. Morrison and the younger Mauk put up video game numbers in their three years together on the varsity.

Considerign the scale of talent he had in his backfield Morrison was very lightly recruited. He only had three offers at the time of his commitment UC, Air Force, and Vanderbilt. He does have a bit of a UC legacy as his grandfather father Joe Morrison was a standout at UC for coach George Blackburn.

One thing that you can always count on with a Mike Mauk coached team and that is that everyone on offense is going to put up massive numbers. I have seen Kenton play a couple of times and the level of detail operate is quite astounding. But that is as much the system as anything. For a small town school like Kenton the athletes will come and go so the only way to win consistently is to have a system that enables your team to compete.

Kenton has that kind of system and Morrison put up a ton of yards and points in his time with the Wildcats but there are concerns about his athletic ability to me. To be blunt I am not sure that he has the athleticism needed to succeed as a WR at this level. He is a very smart football player, but smarts can only get you so far without the athletic ability. Even when you look at his highlights from high school he doesn't separate himself from anyone else on the field athletically and this is at a lower level of Football in Ohio.

To be frank I have a hard time seeing how Morrison can be a productive receiver at this level. He is going to be a Greyshirt so he is going to have a couple of years in a strength and conditioning program to work on his athleticism. But I am not so sure. The talk at the time of his commitment was that the staff took a flier on Morrison to take a run at Maty Mauk. If that was indeed the thought process behind his offer it didn't work. Morrison is a good hard working kid and I want him to succeed. But he has a lot of ground to cover to catch up to his classmates.