A Look At Syracuse

Share All sharing options for: A Look At Syracuse

This remains the image of Syracuse Football over the last five or so years for many College Football fans, but their may be some good news ahead for Orange fans. 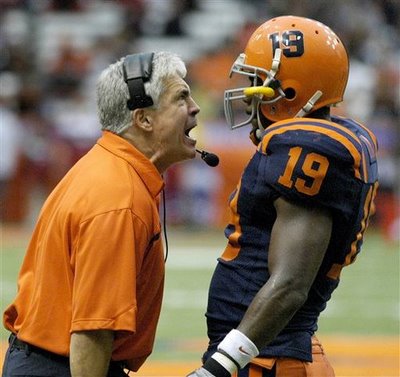 The night is always darkest just before the dawn

That seems to be the general theme around Syracuse these days, or at the very least, my conception of the things taking place in upstate New York. Doug Marrone went 4-8 in his first year at Cuse. That matched the best season that Greg Robinson could muster in his four years at the helm. There are also signs that things are really starting to change in and around the program as well. The first indication of it was the strange and melodramatic events surrounding Mike Williams quiting the Syracuse Football team in the face of another round of suspension. Here was one of the top receivers in the country, the primary offensive weapon on a team almost wholly devoid of them, driven to quit by the strictures and discipline of new regime. That as much as anything else signaled the culture change that was taking place up there.

There is plenty of room for optimism going forward, primarily because Marrone gets the Syracuse program and tradition in a way that Robinson never really did. The record last year was 4-8, and when you take a look the schedule two games stand out Northwestern and Rutgers. The other two wins came at the expense of Akron and the fearsome Black Bears of Maine, not the most resounding victories in the world. But it is the other two that stick out. The Northwestern game was won with a field goal on the final play of the game.

Very dramatic stuff right there. That game was the first genuine bit of good news for Cuse in years and the first signifier that things were a bit different after being dismantled by Penn State and losing to Minnesota in very Robinsonesqu fashion.

The real shocker, and arguably the most surprising result of the Big East season, was their rather authoritative beat down of Rutgers. 31-13 and it really wasn't that close. Cuse had an almost 300 yard advantage in terms of total yards and limited Tom Savage to just 66 yards and picked him twice, easily the low point in a stellar freshman season from Savage. That win had to be incredibly savory for Syracuse fans who in the midst of their Robinson death spiral watched Rutgers rise and usurp their position as the preeminent Football program in the Tri State.

Things are defiantly looking up for Syracuse. They have a chance at a bowl game for the first time since 2004. Mind you, not a great chance, I wouldn't even go as far as assuming that they will make a bowl, but there is a chance. The process of digging themselves out of the Big East cellar in a meaningful way has begun in earnest. But there is a ways to go. The Orange haven't won multiple Big East games in a season since 2004, they have exactly one Big East road win in the last five years, (@ Louisville in 2007) last years two game winning streak was the longest in four seasons. It is hard to fathom just how far into the abyss the Orange descended the last half a decade or so, but it was very deep.

The trick of it is that while they went down, the power structure of the conference in Football changed completely. UC, USF and Lousiville moved over from C-USA and became fixtures in the top half of the standings, though Louisville slipped a lot over the last 3 seasons. Locally Rutgers became Americas darling during the 2006 season and they became everyones program in New York City and have since become the biggest program in the Tri State area. Meanwhile, Connecticut, one of Syracuse's primary rivals in Basketball, actually won a share of the conference in Football, which was an incredible development from my perspective and must have been difficult for Orange fans to handle. So yeah, from a Syracuse perspective the whole world has gone mad. The main question to an outside observer is can the Orange find their way, their place, in the new order of Big East Football? And perhaps most importantly, what is that place? Things are unquestionably improving, but there are still more questions than answers surrounding the Orange Football program and they still aren't out of the woods yet. Even if the forest is clearing.