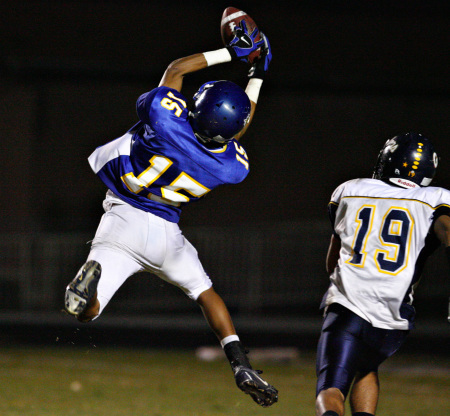 Moore hails from Tampa Jefferson High School one of the established powers in Tampa Bay area High School Football. For all their talent though the Dragons had never had that championship breakthrough until winning their first title last year. Moore and his teammate Andre Davis (USF Commit) were the focal point of a domineering passing game. Davis has more recruiting hype, but Moore just flat out produces. His numbers for his senior season 49 catches, 1500 yards and 20 TD's. I suppose that I should mention that Moore broke his leg in the Florida Championship game, I beleive on a TD catch, but I can't remember. Moore wasn't hurting for offers racking up over a dozen before coming to a final two of UC and Michigan State and picking the Bearcats.

Moore is a polished receiver. He doesn't have the best size, but he is a smart Football player who sets up defensive backs with ease. His speed is deceptive as well. He doesn't look fast, but he glides around and puts space between himself and everyone else, seemingly without trying. The best part about his game is the way he attacks the ball. Should be a great fit in the slot for UC.

Butch Jones wants to go 9 or 10 deep at receiver this year. The more I see of him the more I think that he is going to be one of those 10 guys. I said in the Damon Julian comments that I think Moore might take a red shirt but now I am not so sure. Moore could certainly use a year in the weight room. He reported to UC weighing 166 pounds which is the same weight as Shaq Washington, but Shaq is 6 inches shorted and more solidly built. Ideally I'd like to see Moore put on 15 solid pounds during his redshirt year. I think that one of these incoming Freshman will need to take a red shirt if for no other reason than for class balance. It's never a good idea to have 5 freshman playing one position and I have a feeling that it might be Moore or Max Morrison who appears to be on the roster for this year.