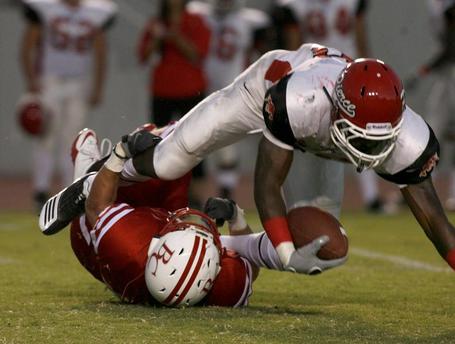 It is always interesting to dig into the backgrounds of these JUCO guys. There are always one or two interesting nuggets in there like Kenbrell Thompkins hearing from his cousin Antonio Brown that Butch Jones is a good coach to play for. The Damon Julian story thread is very similar.

Julian is from Atco New Jersey, a suburb of Philadelphia. He played his high school ball for the Winslow Township Eagles alongside Rueben Johnson who had an equally out of the way journey to Cincinnati. Julian was lightly recruited out of high school. After his graduation he began a long, arduous journey to UC. The first stop? North Carolina Tech, the academic way station that I first become aware of in doing my Greg Blair introduction. Blair and Julian were both class of 2008 so they had to be there at the same time. Another fun fact, of a sort, is that Antonio Brown also went to N.C. Tech , two seasons (I think) before Blair and Julian. Anyway Julian had a pretty good season his one year in North Carolina.

Still he didn't have any offers and he decided to go to a Junior College for one of two purposes, to get his academics in order, or to gain exposure, possibly a combination of both. His landing spot was Pierce College in Los Angeles. He played two seasons for the Brahmas I know, BA nickname. You can view highlights from his Freshman year at Pierce here. That year he earned 2nd team all conference (scroll). He was first team all conference last season.

Julian is a big, physical Wide Receiver. He uses all his height and his body to shield defenders and make catches. He is a commanding presence vertically where he uses the aforementioned attributes as well as his leaping ability to make a living with jump balls. He is an above average route runner that has a series of feints and stems to set up defensive backs to open up the spaces he wants. He attacks the ball in the air. Sometimes he catches with his hands rather than with his body, but he isn't super consistent with plucking the ball out of the air. Phyisical runner after the catch. Has some shake to his game, but not the type of guy who can juke his way out a phone booth.

Good. Look, it's UC. We throw the ball. A lot. Last year there just weren't enough receivers to go around. Butch Jones has stated that he wants 9 or 10 solid receivers and Julian is in that group of 10 without a doubt. Julian has a great chance for a lot of playing time because UC doesn't have that many big outside receivers on the roster, Julian is already the biggest receiver in the bunch, give or take Orion Woodard. The question is how does he adjust to the game and the offense and its complexity. Physically he is ready to make an impact now, the question is how long does it take for him to grab hold of the offense. Being here for spring helps, but I don't think it really answered that question.